This is the first book that provides commentaries on the provisions contained in the Contracts Act relating to Guarantees, Bailment and Agency.
Publisher: LexisNexis From one of the foremost authority and leading author of Malaysia Law of Contract, Tan Sri Dato' Seri Visu Sinnadurai, comes this unique and heavy commentary on the Contracts Act 1950 and its propositions of the law to complete your Contract Law library. Before understanding the principles of the law, it is imperative that the legislation be digested.

This book does just that as each section of the act has been dissected and loaded with deep and detailed commentary and illustrated with leading cases from Malaysia and other Commonwealth jurisdiction for easy and in-depth understanding of the law. A must-have book for all practitioners as it highlights the principles of the Law of Contract from its roots, that is the act itself. Not only that, the gravity of the content of this book has the makings of an instant classic, as the leading text on Contract Law referred to by all the practitioners, bankers and others involved in commercial law in Malaysia.

This is the first book that provides commentaries on the provisions contained in the Contracts Act relating to Guarantees, Bailment and Agency.

• Detailed and wide-ranging as it is not restricted to the law as contained in the provisions of the Contracts Act 1950. Also contains discussions on other related aspects of the law that are not expressly provided for in the Act but judicially accepted as part of the law in Malaysia.

• Highly practical as it adopts the approach of stating the law as interpreted by the judges on various section of the Act.

• Comprehensive and yet easy reading as each section of the Act is reproduced and followed by a commentary on the said section where applicable principles of law are laid out with the discussion of the relevant cases.

• Extensive commentary on Indemnity and Guarantee, Bailment, and Agency. 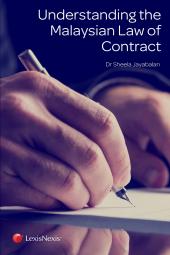