This comprehensive text covers both the jurisprudential and practical aspects of Administrative Law in Malaysia. In this current edition, the book has been updated to include recent developments of Malaysian Administrative Law such as those relating to reviewability of administrative actions and decisions, separation of powers and application of constitutional provisions in judicial review applications.
by Dato’ Seri Mohd Hishamudin Yunus (Consulting Editor) , Dr Saw Tiong Guan (Author) , Himahlini Ramalingam (Author) , Lee Ting Han (Author) 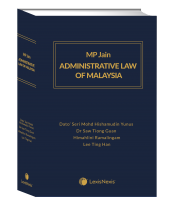 Dato’ Seri Mohd Hishamudin Yunus is a retired Judge of the Court of Appeal with 23 years of experience and has delivered 750 judgements. Dato’ Seri began his career in the Malaysian Judicial and Legal Service in 1973 as a magistrate in Kuala Lumpur and went on to serve in other capacities, in-cluding President of Sessions Court, Deputy Public Prosecutor, State Legal Ad-visor for the State of Selangor, Deputy Parliamentary Draftsman, and Chief Registrar of the Supreme Court. Dato’ Seri is empanelled by the Asian International Arbitration Centre (AIAC) as an Arbitrator. In 2016, he was admitted as a Member of the Chartered In-stitute of Arbitrators (CIArb) in United Kingdom. He was also appointed as a Fellow of the Asian Institute of Alternative Dispute Resolution. Dato’ Seri is the Chairman of the Competition Commission of Malaysia (MyCC), and a member of the Human Rights Commission of Malaysia (SU-HAKAM). He had previously served as a member of the Judicial Appointment Commission (JAC).

Dr Saw Tiong Guan read law at the University of Malaya and became an advocate and solicitor of the High Court of Malaya in 2005. In 2011, he obtained a doctoral degree from the University of Melbourne with a thesis examining the effects of censorship laws on the artistic vibrancy and commercial viability of the film industries in Malaysia, Hong Kong and Australia. He is currently a Senior Lecturer at the Faculty of Law, University of Malaya and teaches Administrative Law, Constitutional Law and Criminal Procedure.

Himahlini Ramalingam graduated with a LLB (Hons) from the University of Malaya in 2004 and was admitted as an advocate and solicitor of the High Court of Malaya in May 2005. She is a partner in Messrs Himahlini & Loh. Himahlini has wide experience advising and representing clients in the areas of corporate and commercial litigation, corporate insolvency and restructuring and defamation, across a broad spectrum of litigation in Court. Her clients include amongst others, government-linked companies, public listed companies, financial institutions, securities and broking houses, judicial managers, liquidators, receivers and managers, media organisations and high nett worth individuals.

View all books by Himahlini Ramalingam (1)